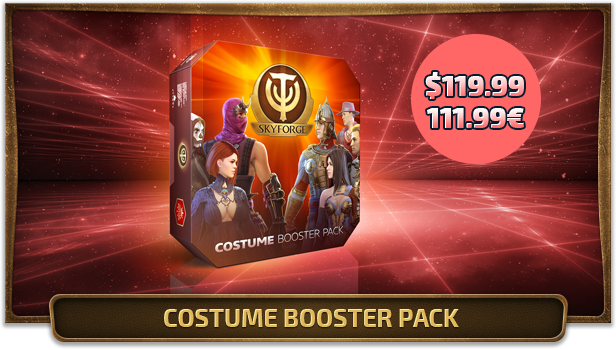 This Costume Pack contains a collection of costumes exclusive to the monthly packs, not otherwise available.

Important: You will not be able to use a Steam-purchased Collector's Edition or Starter Kit on any account that was not created via Steam. If your account was created pre-Steam integration, or you created it via the MyCom launcher from our official website, simply head to our website store page instead.

This DLC will be delivered to the server that your FIRST log into after purchasing it. Please ensure that you log into the server that zou want to receive these items and currencies on (Server selection is available in the my.com Game Center, after launching the game from your Steam library).

Skyforge's unique server architecture supports one server per geographic region. Our server regions currently include servers in NA and EU. Purchases made through services in each of these regions can only be used on characters in the same region.
Skyforge - Costume Booster Pack

This Costume Pack contains a collection of costumes exclusive to the monthly packs, not otherwise available.